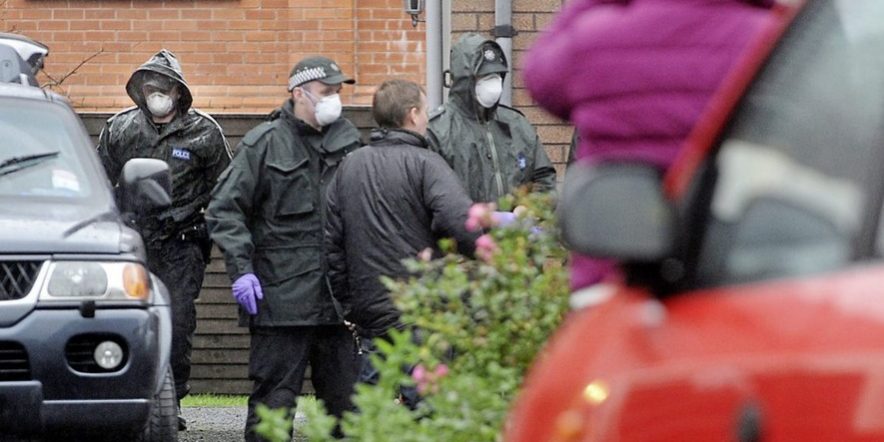 A violent criminal was released on police bail, to an address with no electricity supply to operate his electronic tag, three days before he killed his ex-partner and her friend in a savage attack.

The Police Ombudsman has criticised the decision-making in 2013 which led to release from custody of Sean Hegarty, who had 79 previous convictions including violence against previous partners.

Dr Michael Maguire said had a more appropriate course of action been taken, “it may have reduced the likelihood of what was to happen”.

Caron Smyth (40) and her friend Finbar McGrillen (42) were discovered in the living room of an apartment in the Ravenhill Court area of south Belfast on December 13 2013.

They had died in a frenzied attack, their injuries including fractured ribs and damaged organs as well as serious head injuries consistent with being punched, kicked and stamped on.

Hegarty (36), of Grainne House in the New Lodge area of north Belfast, and 35-year-old homeless man Ciaran Nugent were sentenced in June 2015 to life terms.

Hegarty was told he will serve at least 18 years behind bars, and Nugent 14 years.

Ms Smith had told police just days before the attack that she believed Hegarty was going to kill her.

The ombudsman identified a series of failures.

A week before the double murder, police had gone Ms Smyth’s address to carry out a bail check on Hegarty. She later reported that he was inside, holding her against her will.

Unable to get any response at the front door and window, they left without checking the back door of the property. Checks of his tag would also have confirmed he was on the premises.

Police had Hegarty in custody several times in the months prior to the double murder.

Categorised as a violent offender, he had served a prison sentence for an assault on a former partner.

In October 2013, he was arrested for alleged involvement in a knife attack on a relative and was released on court bail on condition that he live at Ms Smyth’s address and be fitted with an electronic tag.

On December 8, Ms Smyth – from Drumaness in Co Down – contacted police to say Hegarty had locked her in the house for two days and assaulted her with a metal bar.

She told officers that she was frightened he was going to kill her. She also withdrew the use of her address as part of his bail conditions.

Police arrested Hegarty for assault and breach of bail but the following day he was released “to a different address, even though only a court can authorise a change of court bail address”.

Dr Maguire said: “This was a man who was flagged on police systems as a violent offender and who had breached court bail conditions the previous weekend, when they believed he committed a violent assault.

“They did not properly check the suitability of this new property: had they done so they would have established it did not have an electricity supply needed to operate the electronic tag.”

The ombudsman recommended that eight officers be disciplined.

Six have now been disciplined, while one had been required to resign in connection with an unrelated matter and police dismissed the charges against the eighth officer.

Sean Hegarty and Ciaran Nugent were jailed for life for the murder of Caron Smyth and Finbar McGrillen at a flat in south Belfast.

“This report is difficult reading and I acknowledge that on this occasion, we failed to effectively manage the risk posed to the public by Sean Hegarty and for that we apologise.

“It may be of no comfort for the families of Caron Smyth and Finbar McGrillen but I would reassure the public that we will take learning from this and ensure steps are taken to help prevent a tragedy like this occurring again.”

Nicola Harte of Harte Coyle and Collins solicitors, who represent the family of Mr McGrillen, said his partner Tina Gillespie and two daughters “remain devastated by the impact of his murder” and hope policy recommendations being implemented by the PSNI will prevent other families suffering a similar loss.

Policing Board chair Anne Connolly said it was a “tragic and heartbreaking case” and described the ombudsman’s report as “shocking”.

“I have sought assurances from the Chief Constable that all recommendations from the ombudsman’s report would be met and requested that he report back to the Board on their implementation.”

View the full article on the Irish News here