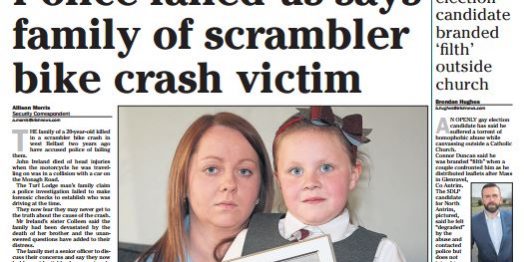 Patricia Coyle acting on behalf of the family of 20 year old John Ireland, who was killed in a road traffic collision 2 years ago in Belfast, has called for the PSNI and the PPS to obtain and review all existing and possible new forensic and medical evidence in the case and to reconsider whether there is a basis for a prosecution.

At a meeting with the family, the PSNI and senior prosecutors from the PPS last week the solicitor was critical of the one sided approach taken by the police during the initial investigation which may have overlooked critical forensic and medical evidence which may have led to a prosecution in respect of Mr Ireland’s death.

“My clients are distraught at the absence of appropriate forensic investigations at the time of the collision.  These investigations may have provided evidence which may have supported a prosecution of the person responsible.  On behalf of the family we have requested that the PSNI devote significant resources to reviewing the cctv in the case, reviewing the existing forensic evidence, applying further forensic testing and securing medical evidence with a view to the PPS reconsidering the decision on prosecution in this case.  Mrs Ireland told the PSNI and the PPS last week that she will exhaust all avenues to get to the truth of the circumstances surrounding the death of her son.”